Date :
06 Feb. 2020
Changed on 07/02/2020
Interface is the technology demonstration space at the Inria Lille - Nord Europe research centre. Located at the very heart of French Tech and within the EuraTechnologies ecosystem, Interface presents the work of project teams working in collaboration with our partners in digital science. 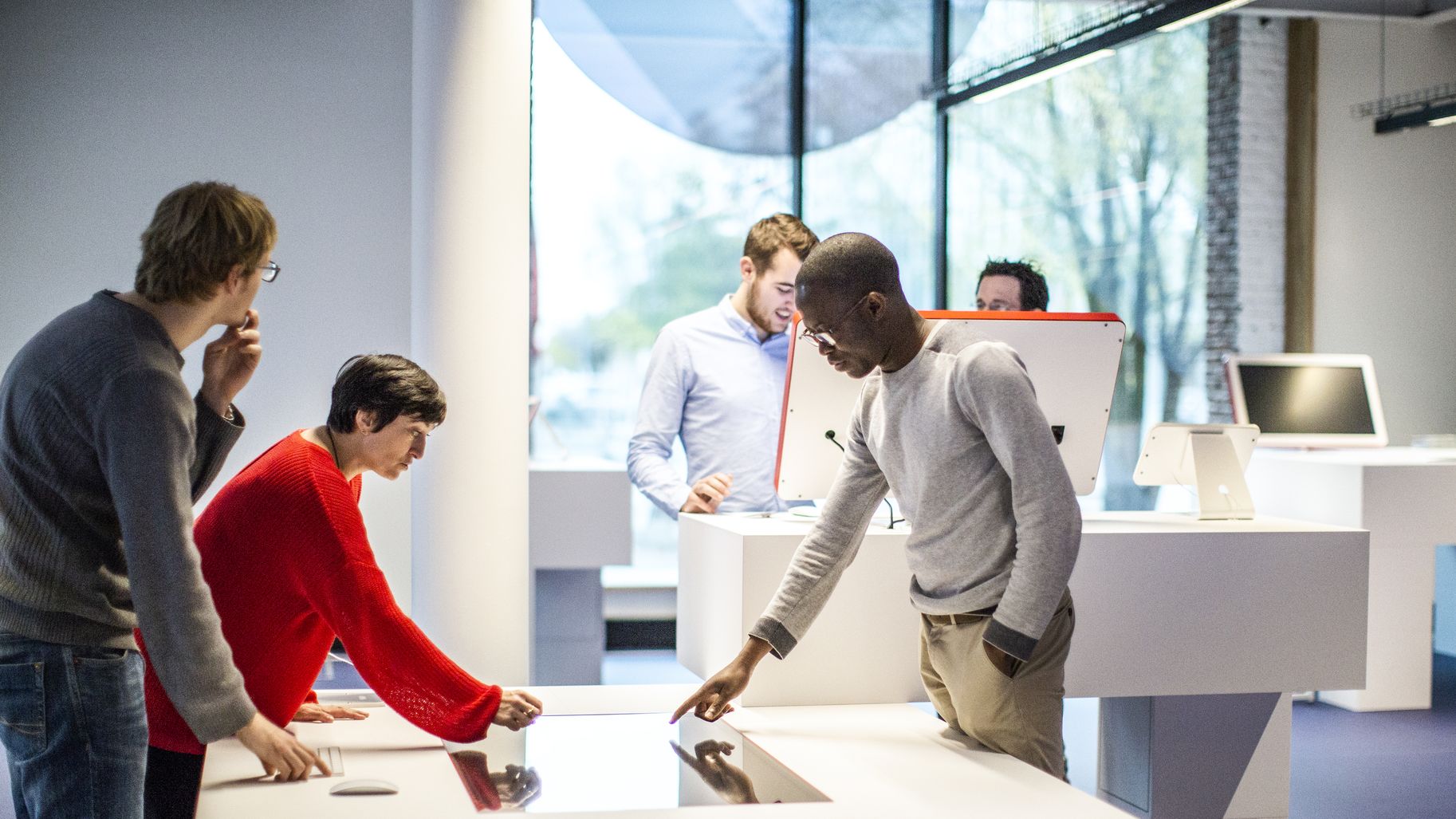 The Inocs research team worked with Jules on optimising order preparation operations at the company’s warehouse, which involved improving the process used to prepare and send 4,000 parcels each day to 440 stores. Their aim was to reorganise the entire chain, rethinking where products are stored in their warehouses, how the contents of parcels are put together and how rounds are organised.

Demonstration developed by the Inocs project team, in association with the University of Lille and with Jules and FlexSim.

Smart Data: research contracts in collaboration with Alstom and HDFID

Smart Data is an illustration of variable data analysis based on advanced statistical methods, drawing partly on the software program MixtComp. The software shows how to get the most out of a large data set (big data), enabling this to be classified and interpreted and allowing predictions to be made.

Holding a conversation with an Artificial Intelligence system

GuessWhat?! And Visual QA are two interactive games that can be used to introduce a computer to our language. These programs illustrate a computer’s capacity to have a natural conversation based on an image through reinforcement learning.

Demonstration developed by the Sequel project team, in association with the University of Lille, the MILA and IGUL as part of the CHIST-ERA project.

Many data are collected everyday via our online interactions. The data collection generates innovative services based on machine learning but also raises major problems about users private lives. In response to these issues, Magnet project-team developed a protocol in order to calculate the data average of a high number of users, while assuring this data does not come out of the initial device, and the average being calculated by a central server.

Demonstration developed by the Magnet project team, in association with the University of Lille

Smart Containers: an illustration of a collaboration with TRAXENS

The start-up TRAXENS had a clear goal in mind: to design a low-cost solution that could be of benefit to all stakeholders in international trade - ship-owners, hauliers, logisticians, manufacturers, etc. - for whom container monitoring has become a key issue, both in terms of security and profitability. As part of a CIFRE thesis, a doctorate student from the Fun project team designed a system that allows containers to communicate with each other and to decide for themselves who will act as the network head, depending on their remaining battery level and their position in relation to GSM or satellite signals.

Demonstration developed by the Fun project team, in association with TRAXENS.

This demonstration gives one possible example of how a soft robot could be used: inspection. The head of the robot is equipped with a camera used to inspect different areas within the white box. The robot's capacity to change shape means it is able to get around obstacles, while its flexibility makes it less likely to cause damage to its immediate environment, and its 10 motors ensure enhanced dexterity.

Demonstration developed by the Defrost project team, in association with the University of Lille.

It takes an engineer 3.5 months to read a million lines of code. And while he's doing that, he can’t do anything else. He can’t understand its structure or identify certain properties. Thanks to these visualizations in these two posters, or other visualizations, the Rmod team offers a way to understand various aspects of a software application (architecture, dependencies, authors, hierarchy and inheritance, quality, bugs, tests...)

Demonstration developed by the RmoD project team, in association with the University of Lille.

Involving the use of a touchscreen tablet, this demonstration highlights latency reduction for interactive systems. It demonstrates a method that can be used to compensate the latency between the movement of a user’s finger and the movement of an object on the screen in real-time, improving interaction efficiency and the subjective preferences of users.

Demonstration developed by the Loki and Valse project teams, in association with the University of Lille within the framework of the ANR TurboTouch.

This space was developed with financial support from the French Government, the Hauts-de-France region and la Métropole Européenne de Lille.