Date :
15 Nov. 2019
Changed on 03/01/2020
Launched in April 2018, the InriaTech Sud-Est platform strengthens the dynamic of technology transfer towards companies among research teams at the Inria Sophia Antipolis - Méditerranée centre. The future looks bright for this initiative. 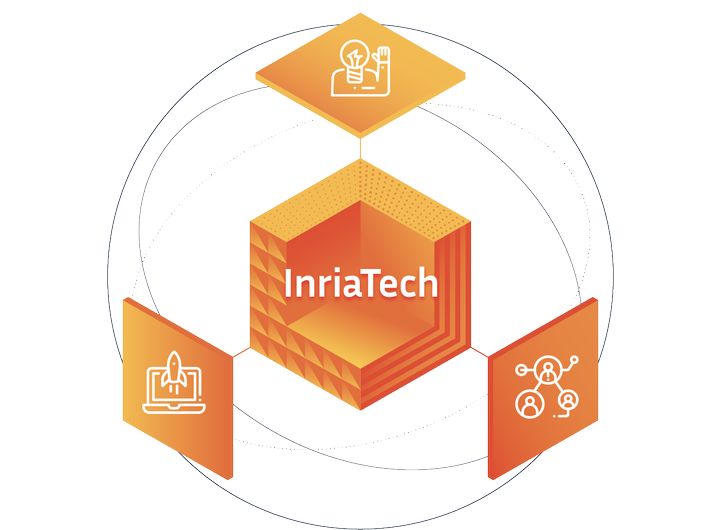 InriaTech Sud-Est invited its partners to an event at the Sophia Antipolis technology park on 3rd April 2019 to celebrate its success. The team, which is managed by Amar Bouali and comprises three engineers and a business manager, has been active for close to a year. To support the launch of the platform, InriaTech Sud-Est was awarded grants from the Communauté d’Agglomération de Sophia Antipolis (CASA) and the Région Sud Provences-Alpes-Côte d’Azur. Companies have significant needs in fields linked to science and digital, particularly within the region, and the InriaTech concept attracted the attention of local decision-makers. InriaTech Sud-Est is planning to recruit new engineers in 2019 to meet demand.

The goal is to make it easier for researchers and companies to work together, with the latter often lacking the specialist knowledge they need to tackle certain challenges or to overcome technological barriers, explains Amar Bouali .


"Within the context of digital technology, the crux of the matter is having the necessary engineering resources to experiment with a solution or to develop software or prototypes. The InriaTech initiative gives researchers and companies working together access to a team of expert engineers well-versed in Inria’s areas of research and capable of ensuring the company’s project is able to progress in a pragmatic manner. During the technology testing phase, we provide our expertise (consulting, technological building blocks, etc.) in order to assess and approve their practical examples". Amar Bouali .

The concept of the facilitator-accelerator for technology transfer between research and the corporate world proved attractive to the Sud Provence-Alpes-Côte d’Azur region, which selected InriaTech as an innovative structuring project within the framework of its Operations of Regional Interest (OIR). It was for this very reason that the Région Sud and the Communauté d’Agglomération de Sophia Antipolis, which is home to Europe’s largest technology park, made the decision to lend financial support to the launch of InriaTech Sud-Est .

Barely a year after its creation, InriaTech Sud-Est now plays a vital role within the local ecosystem, cooperating with researchers from the CNRS and the Université Côte d’Azur (UCA). The reference centre "Digital Challenges", one of three UCA IDEXJedi reference centres, is supported by the InriaTech initiative. These centres are tasked with strengthening ties between fundamental research, innovation and the socioeconomic world. This dynamic is set to move up a gear in the coming months. Like the Université Côte d’Azur, Inria is a partner in the Côte d’Azur Interdisciplinary Institute for Artificial Intelligence (3IA Côte d’Azur) within the framework of the Future Investment Programmes (PIA - Programmes d’Investissement d’Avenir).

For the Areco Group , a global leader in nebulisers, Inria researchers and engineers are working on a system capable of automatically recognising vegetables. The collaboration with the start-up MyDataModels (high-level data processing), meanwhile, concerns the field of “small data”. Another agreement in place with a start-up from the automotive industry, Epicnpoc , specialising in human-vehicle interface ergonomics, concerns intelligent services. Then there is the partnership with Live Anatomy , a physiotherapy start-up based in the Aix-Marseille region, a project which involves the automatic processing of scans and their conversion into 3D images.

In all, a dozen or so contracts have been signed or are in the process of being finalised. Our five-year plan is to build a team comprising between twenty and thirty engineers, explains Amar Bouali .

"MyDataModels is a start-up that was launched in March 2018. We develop and market software enabling companies to generate and automate predictive models in fields where only small amounts of data are available (small data), including the medical sector, design offices, etc. Our ‘core technology’ requires knowledge in both pure and applied mathematics. InriaTech engineers have extensive knowledge of the work carried out by research labs and know how to use the expertise required for prototyping software. For us, this is the missing link."

"It was Guilène Ribière, responsible for partnerships at InriaTech , who introduced me to MyDataModels . I consulted with them in order to assess their specific needs and to properly outline the problem. Based on the research that we were going to carry out, InriaTech Sud-Est developed a more flexible software prototype, enabling quicker tests to be performed. We then outlined a pure research project. It’s a very interesting challenge, one which involves finding a synergy between concrete industry needs (the need to have a profitable result) and the interests of fundamental research.