Date:
09 Jun. 2021
Changed on 14/06/2021
From 16 to 19 June, Inria will participate in Viva Technology. The programme includes a stand dedicated to Startup Studio, Inria's programme dedicated to the emergence and support of digital deeptech startups, which will host eleven startups or startup projects, two startups on a partner's stand, three interventions in conferences or broadcasts and a meeting to promote the place and role of women in the digital sector. 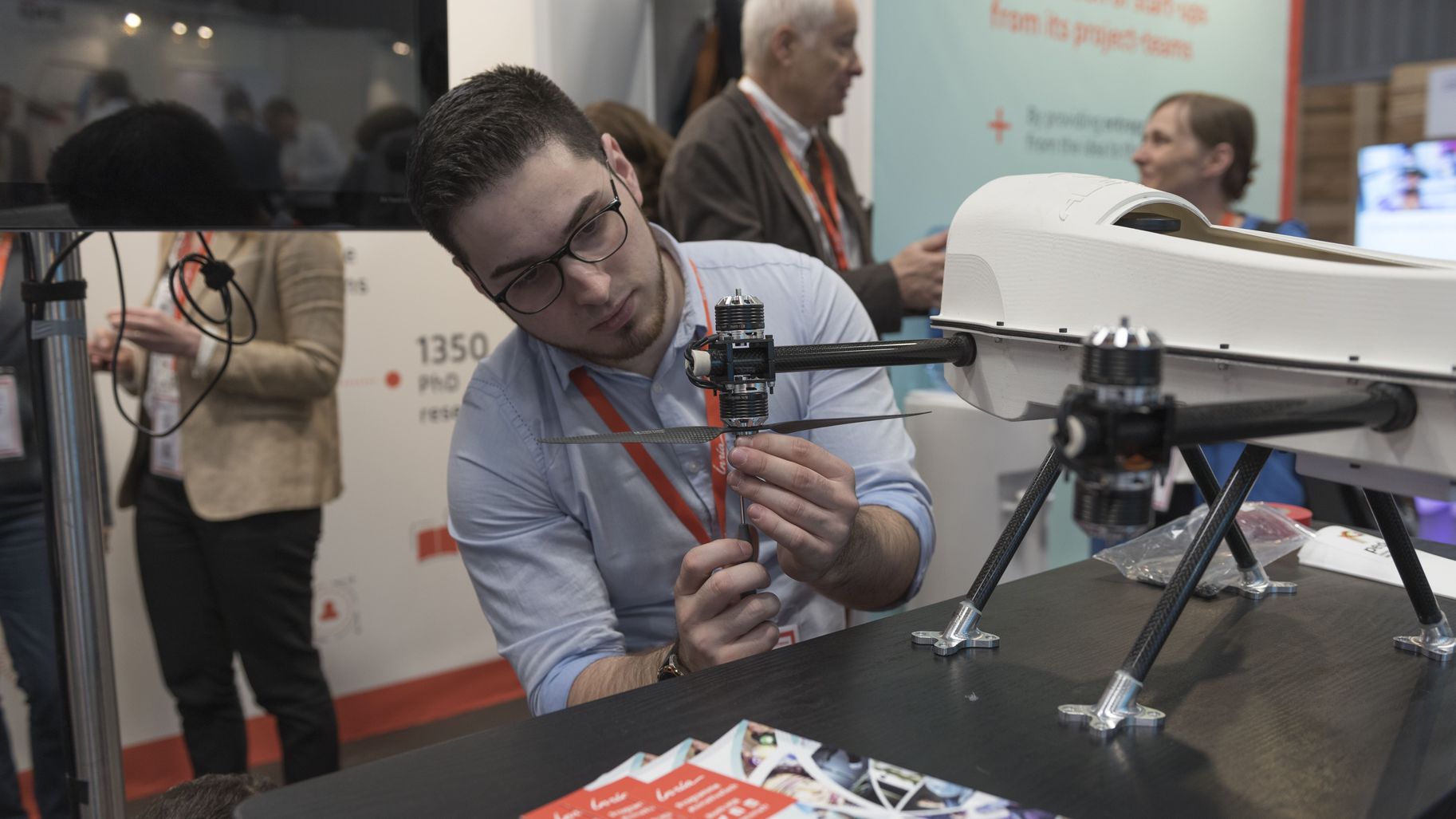 Project carriers and deeptech startups in the spotlight

Supporting and encouraging digital deeptech entrepreneurship is a strong ambition of Inria, which is in line with its strategic objective of strengthening its economic impact and is reflected in the mission of the Inria Startup Studio.

The Inria stand at Viva Technology 2021 (D21) will host Hervé Lebret and Sophie Pellat-Velluire, the two managers of Inria Startup Studio, who will present this programme, which is open to all project leaders, whether or not they work at Inria.

They will be joined by the project leaders they support as well as startups from Inria who will take turns on the Inria stand throughout the four days of the show:

Stackeo is the first collaborative software for the design and management of connected solutions that enables companies to succeed in their transformation via the Internet of objects (IoT) without risk, delays or excessive costs. Stackeo accelerates the sale of products "as a service" and helps ensure profitability, reliability and sustainability.

This startup project proposes the Sources de Confiance product, intended for elected officials and agents of local authorities to enable them to find more quickly the official administrative, public and academic sources they need in their functions and without changing their habits or search engine. Unsearch is also working on adapting this technology to other sectors (education, culture, media, etc.)

On site on 16 June, online during the 4 days of the show.

Malizen is designing ZeroKit, a new software platform to give back useful time to cybersecurity teams. ZeroKit centralizes events and team intelligence around collaborative analysis interfaces and learns from decisions made to support cyber analysts and give them back some useful time.

On site on 16 June, online during the 4 days of the show.

Concordant frees up data, even when mobile or offline. Users can keep data on their device or in the cloud, share it and collaborate in groups; instant response and availability are assured.  Concordant makes it easy for developers to manage data, providing consistency and persistence, all through its uniform interface regardless of location.

See the video of the Concordant project (in French)

On site on 17 June, online during the 4 days of the show.

See the video of the Flit Sport project (in French)

The startup qatent applies the latest generation of Automatic Language Processing and deep learning tools, combined with the know-how of Industrial Property Attorneys, to produce better and easier patent applications for applicants, inventors and the industry.

Read the article about qatent

The startup XScalibur is developing a technology for modelling and generic deployment of cloud resources and services in order to improve the management of multi-cloud environments in an eco-responsible manner.

Winner of the Orange Challenge, it will be present on Wednesday 16 and Thursday 17 June on the Orange stand, another Viva Technology partner, and on Friday 18 June on the Inia stand.

Read the article about XScalibur

Daspren is a Deeptech startup from Inria. It is made up of a team of experts who are passionate and determined to offer their customers high-quality protection solutions. Its Parad solution, based on artificial intelligence, is a unique solution capable of detecting pure zero-day ransomware attacks, with no known IoC and no history.

See the video of the Cybersecurity Project

The idea of the project leader Robodelice: to design a fully automated robot for cooking and serving fresh food.

On site on Saturday 19 June, online during the 4 days of the show.

See the video of the ROBOCHEF project

The startup Statinf proposes to evaluate the execution times of so-called "critical" programs using new statistical and probabilistic approaches. The upcoming solutions should help manufacturers to perform a statistical time analysis of all embedded computer systems, including those based on multicore processors.

On site on Thursday 17 June, online for the 4 days of the show.

Read the article about the Statinf startup

Accelerating responsible digital innovation at the service of society, an ambition shared by La Poste and Inria

On Wednesday 16 June at 5:20 pm, a cross-interview between Bruno Sportisse, CEO of Inria, and Philippe Wahl, CEO of La Poste, will be broadcast on the Viva Technologynologies web platform. Answering questions from Margot Haddad, a journalist on B Smart TV who hosts the CEO stories at Viva Technologynologies, Bruno Sportisse and Philippe Wahl explain the ambition of the partnership they signed at the end of March 2021.

On Thursday 17 June, between 11 a.m. and 12 noon, Stanley Durrleman, co-director of the Aramis project-team, Inria Paris and Institut du Cerveau, will take part in a panel « Healthy Tech : Algorithms Designed for Healthcare », which will be broadcast on the VivaTech platform and offered live to visitors to the show on stage 3. He will present his work on brain modelling to tackle neurodegenerative diseases

Other highlights for Inria : Mega Women & Girls in Tech

Four interventions in the Mega Women & Girls in Tech programme which which aims to promote the place of women in the world of technology.

On Friday 18 June from 12 to 1 pm, Muriel Brunet, head of the Education and Digital programme at Inria, will speak at the round table entitled "How can we act together from school onwards for egalitarian digital technology? "

The discussion will be moderated by Bastien Masse, Coordinator of the EO&IA Chair for Open Education and Artificial Intelligence, Centre for Pedagogical Development at the University of Nantes, Director of the Class'Code Association and will involve :

Muriel Brunet, head of the Education and Digital programme at Inria, will take part in the round table entitled "Women's involvement in the State's digital sector" organised by the Interministerial Digital Directorate. This discussion will be moderated by Frédéric Bardeau, co-founder of Simplon, and will include

Inria will offer an online meeting on the theme "Women in digital sciences. Why not you? "hosted by Muriel Brunet, with :

This event is part of the programme organised under the Mega Women & Girls in Tech banner, which aims to promote the place of women in the world of technology.

Olivia Breysse, Head of the Transfer of Innovation and Partnerships Department at the Inria centre in Saclay - Île-de-France, will speak in the session "Diversity: Can tech be parity? ".

The session will start with a 30-minute round table discussion moderated by Pierre Louette, CEO of Les Echos Le Parisien and will end with two presentations of initiatives: Wogitech and Gwenaelle Thiebault, CEO, Marie Claire France for the presentation of the Tech For Women Salesforce/Marie Claire Prize.