Date :
18 Oct. 2019
Changed on 30/03/2020
The IceSL software program is the fruit of several years’ worth of research. It can be used to model objects in 3D and to manage the printing process from start to finish. It has built a solid reputation in the field of software for 3D printing. Given that it is also available to download for free, the software is highly regarded in “fablabs” (manufacturing studios) and among a whole host of passionate users. 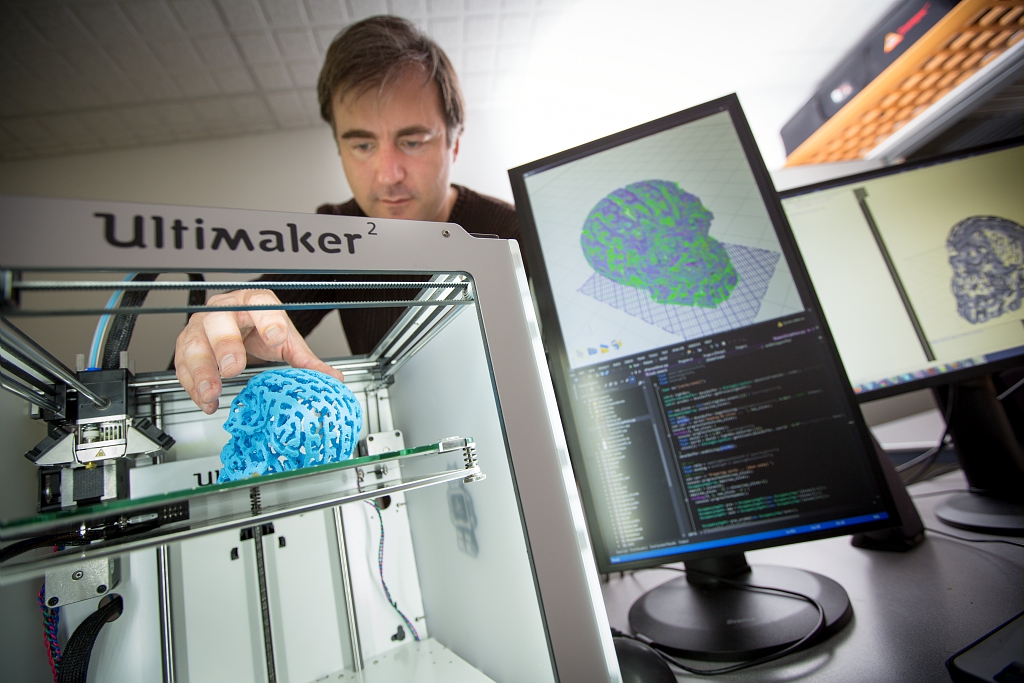 Allow me to introduce myself. My name is IceSL.

My name is a hotchpotch of the letters of the word “slice”, a concept that is highly relevant for specialists in 3D printing. It refers to the “slicing” stage, which involves supplying information on the slices produced by the machine. I was created by the MFX team, a joint undertaking involving Inria and Loria. I am simultaneously a major innovation regularly described in open access articles, and a free and popular software solution. So far I have already been downloaded more than 50,000 times, with my online version used to slice more than 13,000 3D models.

It all started back in 2012 with the Shapeforge research project: the idea my creators had was to apply algorithms and protocols initially developed for computer graphics to “additive manufacturing”. “From a digital point of view, we noticed that there were similarities between 3D printers and screens”, explains Sylvain Lefebvre, director of research at Inria and head of the MFX team. “In both cases, you have to be able to process vast quantities of data in order to draw or reproduce the shapes described using the computer, which are often highly complex.” When it comes to slicing, my role is to facilitate the modelling and additive manufacturing of 3D models. I am now capable of assisting users with the three main issues they encounter: determining the shape of an object; cutting an object into slices (enabling it to be manufactured by layering slices one on top of each other); and the variation of physical properties inside objects (colour, porosity, flexibility).

One of the first difficulties I faced was compensating for the fact that many modelling programs are unable to design parts comprising complex internal structures. The issue here is that the internal structure of the components being manufactured has a major impact on their end properties. It is often beneficial for designers to hollow out the parts to be printed in order to save on materials and to reduce manufacturing time to a minimum, particularly in cases involving larger components. Cavities inside models can also be useful in terms of giving them a degree of stability. Various sizes of honeycomb structures can produce components which are light but very solid, and capable of withstanding impact.

I have advanced features that are unique when it comes to modelling internal embossing, progressive infills, multi-filament colour printing, and managing the supports needed to hold the part in place during printing.

Particularly key to my development was the expertise of MFX (Matter from Graphics) in image processing and geometry via parallel algorithms and techniques for optimising and manipulating geometric data structures. I currently have four researchers, three engineers and three PhD students working on me! It’s a lot, but MFX is actively looking to recruit new postdoc researchers and interns in an attempt to ramp up research and development into my software.

“IceSL, developed by the MFX research team, is a bit like our showcase within the community of ‘makers’ (enthusiasts, students, researchers, etc.)”, explains Sylvain Lefebvre. We are looking to make the results of our academic research available to the general public and other researchers by giving them an open access platform.

Thanks to my reputation among makers and my general visibility, the MFX team has been able to establish a number of partnerships with manufacturers. This is all part of the researchers’ ongoing plan for improving me, primarily in the field of robotics (for designing robot parts, for example) and health (for manufacturing prosthetic body parts).