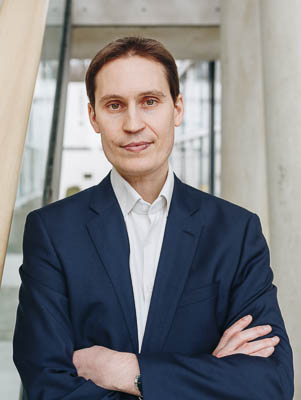 Guillaume Prunier has been appointed Deputy CEO for Administration on January 1st 2019.

Guillaume Prunier began his career at the SNCF, where he contributed to improving the punctuality of the trains departing from the Gare de Lyon; he then worked for Areva, where he coordinated the construction of the Olkiluoto EPR reactor building in Finland.

From 2010 until 2012, Guillaume Prunier was head of department at the Regional Directorate for the Environment, Town and Country Planning and Housing (DREAL) and special advisor to the Prefect of the Haute Normandie region. There he was responsible for the management of European funds (ERDF) and the sharing of the state's geographical information.

Guillaume Prunier then joined the French Ministry for the Economy and Finance as head of the innovation and technology policies office until 2014. He notably wrote the report “Innovation, a major challenge for France” by Jean-Luc Beylat and Pierre Tambourin, and the inter-ministerial plan “A new deal for innovation”.

In 2014, having become an adviser to Emmanuel Macron's cabinet, Guillaume Prunier was in charge of innovation, entrepreneurship and SMEs. In particular, he was strongly involved in the development of the French Tech initiative, and coordinated the reforms in participatory budgeting (rulings of 2014 and 2016) and the employee stock ownership plan (law on economic growth, activity and equal opportunities).

In 2016, Guillaume Prunier contributed - in his role as pre-sales manager - to the commercial success of Anaplan, a Silicon Valley ‘unicorn’, which has since been successfully listed on the stock market.

Then, in 2017, Guillaume Prunier moved into the world of entrepreneurship by taking over as CEO of Flaminem, a start-up in difficulty that specialised in big data analysis and artificial intelligence. He pivoted the company towards an activity of security and compliance software publisher, managed the creation of a new product, gathered together a prestigious board (former heads of large companies, former Chief of Defence Staff, former head of intelligence at the French General Directorate for External Security (DGSE), etc.) and signed the first long-term contracts with major clients.