Date:
08 Dec. 2019
Changed on 23/06/2020
Although computed tomography (CT), magnetic resonance imaging (MRI) and microscopy give physicians valuable information about our state of health, the resolution and contrast of the images they produce could be further improved with better signal processing algorithms. This is the ambition of Émilie Chouzenoux, an Inria researcher at Saclay and a specialist in the field who has recently received a European Research Council (ERC) Starting Grant worth €1.5 million. 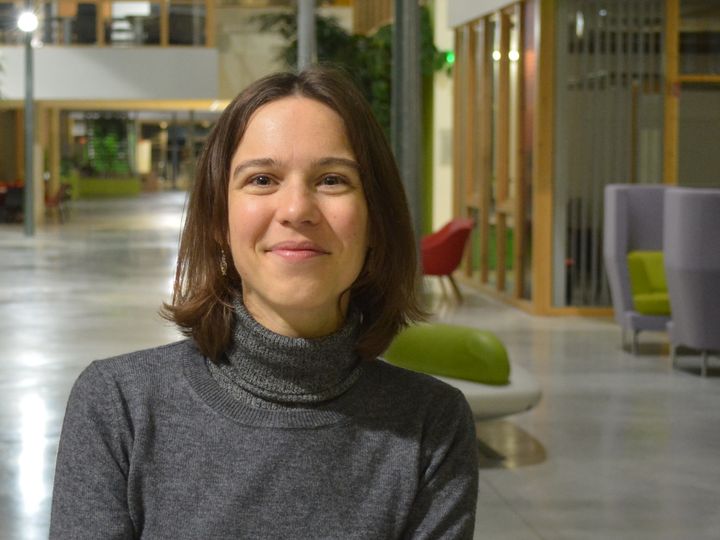 I applied for this ERC grant because other colleagues had got it before me, because I was approaching the age limit for starting grants and because I wanted access to greater resources," explains Émilie Chouzenoux, a member of the Opis project team at Inria Saclay - Île-de-France research centre and a recognised specialist in optimisation algorithms for medical imaging reconstruction ."Mission accomplished! Now I can set up my own research team, recruit six co-workers, invest in a high-performance computing server, and, I hope, achieve the results that we have predicted."

Since completing her thesis between 2007 and 2010, the young researcher has dedicated all her research to this topic while at the same time uncovering new themes, contributing to 50-odd papers, and working with the Gustave Roussy cancer centre as well as General Electric Healthcare , the global leader in medical imaging.

Medical imaging performs well but there is plenty of scope for improvement.

The ERC recognised these hallmarks of excellence, but even more so, the innovative nature of her project. Émilie plans to offer a leap forward in the quality of medical imaging contrast and resolution, thus ensuring more reliable diagnoses and better targeted treatments.

Current medical imaging performs well but there is plenty of scope for improvement. Some examinations have to be redone because the images are not sharp enough.

Casualty departments – where there is no time to wait – use simplified algorithms to the detriment of image quality.

An emerging technique like two-photon excitation microscopy has not reached the nanometric resolution that had been hoped for. And so on.

Medical imaging does not capture an image – it reconstructs it

The obstacles to be overcome do not lie in the imaging machines themselves but in the processing of the data they record . A CT machine, an MRI machine or an electronic microscope convert light into numerical values. Reconstructing images based on these values poses formidable mathematical problems which are solved using optimisation algorithms. Of these there are many, but very few can handle the increasing quantity of data captured by these imaging devices, which can vary from hundreds of thousands to millions of values per image.

The radical change that Émilie is working towards involves "majorization-minimization" algorithms, which can cope with this rapid increase in data while at the same time being faster and more robust . The goal is to obtain images with better resolution (sharper) and less noise, i.e. greater contrast between the region of interest – a tumour or fracture line – and all that lies around it.

Baptised MAJORIS *, Émilie's ERC project focuses on parallel computing. To process millions of data items, these must be distributed across several machines, after which the results must be pooled and combined to produce a coherent image. However, most current optimisation algorithms are not made for such a task. Émilie has started testing new ones, and the initial conclusions are encouraging.

Another challenge is to factor in the errors in the machines' mathematical models. These models record the physics of the sensors, the region covered by each one and their distance from the patient, etc. All these data are indispensable for reconstructing images. But if they are oversimplified or even erroneous – it does happen – the image and diagnosis are wrong.

We will develop algorithms which can produce reliable images in as few steps as possible.

Lastly, Émilie has set an even more ambitious goal: enhanced images . These could be tumours surrounded by clearly demarcated boundaries, or tumours accompanied by a confidence interval (± X%) regarding their exact dimensions."This is the trickiest scientific aspect of the project. Still, I am optimistic about our chances of success."

OPIS works alongside research teams in France and abroad (United States and India) as well as with industry partners, including GE Healthcare.

"AI for Health" challenge 2019 – improving the fight against cancer

Émilie acted as science director and jury member in the Île-de-France AI for Health 2019 challenge 2019, which boasted €1 million in funding.

The challenge was open to small- and medium-sized businesses as well as start-ups. It asked them to develop algorithms for predicting the risk of breast cancer recurrence and detecting a prognostic biomarker using anonymised patient data and images. Owkin was the winner, and they developed excellent algorithms.

"One of the reasons for this challenge was to identify good industry partners with whom we may be able to work in the future.