Date:
28 Jun. 2018
Changed on 14/01/2020
Bruno Sportisse was appointed Chairman and CEO of Inria on 27 June 2018 by a decree of the President of the French Republic. He replaces François Sillion who has been acting as Inria's Chairman since 22 January 2018. 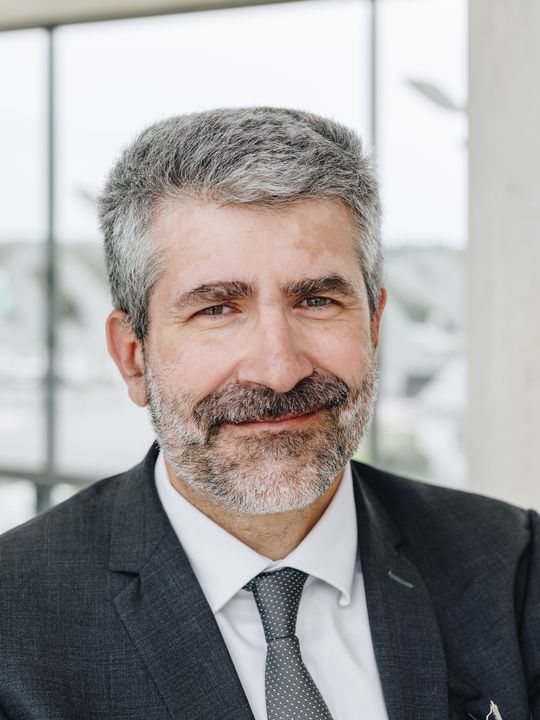 Bruno Sportisse is a graduate of the École Polytechnique and chief engineer of the Corps des Ponts et Chaussées. He also holds a PhD in applied mathematics and a research habilitation.

His entire scientific career has been with or within Inria: after his PhD work devoted to high-dimensional dynamical systems, carried out under the supervision of Bernard Larrouturou, then Inria CEO (1996-1999), he coordinated an Inria Joint Research Action on numerical simulation for environmental applications (COMODE), before creating with Isabelle Herlin the CLIME Inria project team dedicated to data assimilation in 2003, while serving as director of the joint Ecole des Ponts-EDF R&D laboratory which he founded.

From 2008 to 2012, Bruno Sportisse was Director of Technology Transfer and Innovation at Inria. He set up numerous technology transfer support initiatives.

In 2014, Bruno Sportisse became the Executive Vice President of Thuasne, a mid-sized MedTech company, where he initiated the digital transformation of the company. In 2016, he started an entrepreneurial adventure that led to the creation, with Agnès Guerraz and Eric Gaussier as cofounders, of Skopai, a FinTech startup company combining artificial intelligence and natural language processing, and stemming out from the University of Grenoble-Alpes (LIG, Grenoble Lab for computer science).

In 2018, he was also tasked by the French Ministers Bruno Le Maire (Economy), Florence Parly (Defense), Frédérique Vidal (Higher Education, Research and Innovation) and Mounir Mahjoubi (Digital) with proposing the design and the implementation of a European Agency for Breakthrough Innovation , in conjunction with the creation of the European Innovation Council (EIC) within the next European R&D framework programme.

Scientific excellence must of course be at the heart of our priorities because we are a research institute: by exploring the new frontiers of research, by positioning ourselves, through our choices, on the subjects of tomorrow, by encouraging researchers, especially the youngest ones, to take risks, and by making Inria even more attractive.

“Inria has played a major role along my different positions and I want to give back my experience. I will pursue Inria's historic ambition: ‘Scientific excellence and transfer’ while we are in a fast-moving landscape. Scientific excellence must of course be at the heart of our priorities because we are a research institute: by exploring the new frontiers of research, by positioning ourselves, through our choices, on the subjects of tomorrow, by encouraging researchers, especially the youngest ones, to take risks, and by making Inria even more attractive. Increasing the impact of research will be another priority; specifically, Inria will continue Antoine Petit’s momentum in favour of the creation of startup companies stemming out from our project teams. Finally, alongside these historic missions, Inria will assume, for the benefit of the entire French digital ecosystem, its new role as the operator of the national research plan on artificial intelligence, in line with the ambitions set forth by the French Government.”