Artificial Intelligence: Inria and the DFKI (Germany) are committing to a common research agenda

Date:
21 Feb. 2020
Changed on 21/02/2020
In early 2020, Inria and the German research institute the DFKI signed a memorandum of understanding to launch joint research projects into artificial intelligence (AI). They have their sights set on breakthroughs in health, cybersecurity, robotics and manufacturing, but they are also keen to answer some of the questions raised by AI at a societal level. We met up with Bruno Lévy, director of the Inria Nancy - Grand Est Research Centre, and Antonio Krüger, director of the DFKI (Deutsches Forschungszentrum für Künstliche Intelligenz - the German Research Centre for Artificial Intelligence). 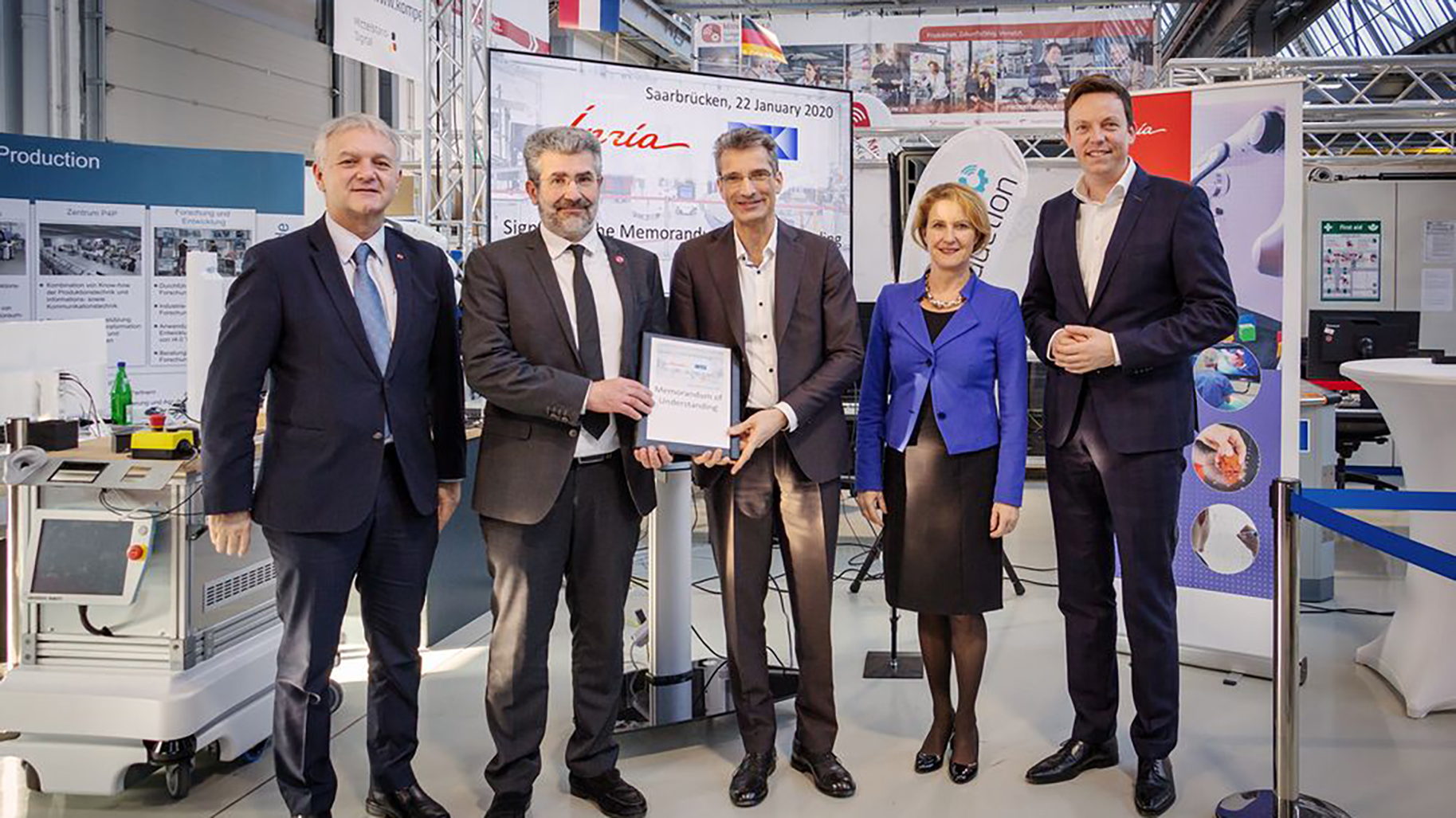 Artificial intelligence is a vast field, and one not always understood by the general public. What would be your definition of it?

Bruno Lévy: I'd define AI as mathematics set to music using informatics, with an impact on the real world. Our work involves developing new applications, while also inventing the theories that will form the basis of the methods and tools of tomorrow.

How are Inria and the DFKI complementary in the field of AI?

Antonio Krüger: both institutes have roughly the same number of AI specialists. We speak the same language, we are studying both theoretical and practical aspects and that is key if we want to be able to understand each other. I would say that the DFKI is more focused on the practical side of things, while Inria is more focused on the theoretical, but both institutes are active in both areas.

Bruno Lévy: we held a seminar in Nancy in January that was attended by around a hundred researchers from Inria and the DFKI. The aim was to get them to present their research in order to identify common themes. We were worried that people might not talk, because they didn’t know each other, but the opposite happened: the discussions were lively, the participants were enthusiastic and we identified a number of themes to study together in more depth. There was no shortage of complementarity, or cooperation for that matter.

Do you have any examples of subjects you'll be working together on?

Bruno Lévy: the teams are still in the process of putting their projects together. It will then be up to a binational body to select projects and grant funding, with work expected to begin before the summer. We do know some subjects that will definitely be selected: a voice-user interface designed for the emergency services; further cooperation between humans and robots in industry; ramping up pre-manufacturing design.

In the context of sustainable development, we will be putting our heads together to try to come up with ways of making AI more energy-efficient. Storing millions of pieces of data on hard drives uses up a lot of electricity. Researchers from the DFKI are working on hardware solutions that use 100 times less energy. Researchers from Inria, meanwhile, are designing computer architectures that are substantially more energy-efficient.

Antonio Krüger: in the health sector, one subject we identified was early diagnosis of Alzheimer’s disease. The disease is currently difficult to diagnose, meaning diagnoses are often made late. This involves cognitive tests; patients are asked to write and trace certain shapes, which are then examined by a doctor in an attempt to identify any anomalies. Dedicated AI tools would enable a far more rigorous assessment of patients’ writing and drawing. AI would also be able to analyse patients’ voice and speech, using this for diagnostic purposes.

In both France and in Germany, AI is raising questions and worries, some of which seem quite far-fetched. How would you respond to that?

Bruno Lévy: it’s natural to be suspicious about something you don’t know. There will also be an educational aspect to our collaboration - we want to explain to pupils and students what AI is capable of, what it is and what it isn’t.

Another facet will involve explaining how it works, which is a challenge for scientists: they are aware of the exceptional learning capacities of neural networks, but they don’t necessarily understand them! The biggest challenge in the field is to create a mathematical theory of learning. In a practical sense, this theory will help make AI certifiable, enabling it to conform to ISO type standards. For example, if drones must fly above our towns and cities, then I have to be certain that they will always keep a minimum distance from obstacles and people, in all circumstances.

Antonio Krüger: I’m convinced that AI will bring about major progress. It's important to remember that current AI tools are hyper-specialist, meaning they are far removed from the versatility and the adaptability of the human mind. We should be wary of science fiction scenarios and speculation.

That said, we need the general public to trust us if we are to make progress, which is where the educational aspect Bruno referred to comes in. Initiatives also have to be launched within our own institutes. At the DFKI, a six-person ethics committee has been set up to examine our projects, to put forward recommendations and to ensure that these are applied. We can't rely solely on the goodwill of researchers: we need regulatory bodies.

Inria CEO Bruno Sportisse states: "This MoU between DFKI and Inria illustrates the momentum of the French-German cooperation on AI within the European dynamics, following the Aachen Treaty and the recent meeting of Toulouse. Our national plans dedicated to AI promote bilateral partnerships between research organizations from both countries. DFKI and Inria share a similar and open vision about AI and this paves the way for new opportunities in order to strengthen our partnership on concrete projects, both at bilateral and European levels".