Anne-Marie Kermarrec, a Rennes-based researcher turned entrepreneur, is made a Chevalier of the Légion d’honneur.

Date:
28 Mar. 2019
Changed on 03/01/2020
In 2015, after thirteen years managing the project team ASAP at the Inria Rennes Bretagne-Atlantique research centre, Anne-Marie Kermarrec launched the start-up Mediego, bringing to life in a business context two decades’ worth of research into large-scale distributed systems. On Wednesday 27th March, she was made a Chevalier of the Légion d’honneur, recognition for her glittering career as a researcher-turned-entrepreneur.

Anne-Marie Kermarrec was a young student in Rennes when she began her career as an IT researcher. In 1996, after completing a PhD on fault tolerance in shared memory systems, she left for the Netherlands to study a postdoc, before moving to England, where she worked at the prestigious Microsoft Research Lab in Cambridge. Anne-Marie Kermarrec spent four years working for the computing giant, enough time to explore her passion for epidemic algorithms and peer-to-peer systems. 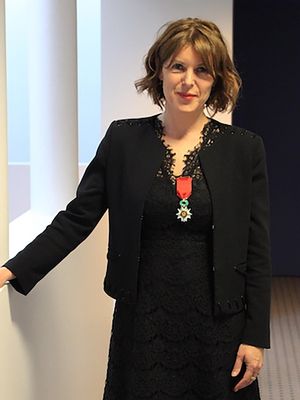 The researcher returned to Rennes in 2004, joining the Inria Rennes - Bretagne Atlantique centre as an Inria director of research. It was then that she took charge of a new project team christened ASAP - standing for As Scalable As Possible - set up to study large-scale dynamic distributed systems. Her research work saw her slowly gravitate towards an emerging field in the world of the internet in the mid-2000s: user experience personalisation. A few years later, this same subject would be central to the GOSSPLE project, which was awarded two grants from the European Research Council - a Starting Grant in 2007, followed by a POC grant in 2013. As Anne-Marie Kermarrec explains, “What we wanted was to enable internet users to have their own internet, drawing on the concept of collaborative filtering. This is a personalisation technique that makes recommendations to internet users by comparing their preferences to judgements made by other internet users with similar profiles. What made the project original was the way we applied these principles to peer-to-peer systems, enabling us to obtain efficient, durable and scalable decentralised content solutions that also fully respected user privacy. ”

From research to the launch of a start-up

While all this was happening, Anne-Marie Kermarrec was becoming increasingly keen to convert her research into innovation, resulting in her contacting IT Translation, the technology seed capital fund set up by Inria to support the creation of companies with their roots in public research in the digital sphere. The start-up  Mediego was born in April 2015, with the goal of developing an ultra-personalised recommendation solution aimed at media and content editors. This saw Anne-Marie Kermarrec become a “startupper ” at the age of 44: “In France, there is relatively little osmosis between the worlds of research and business, which is not the case in the majority of other countries. Fortunately, Mediego were able to benefit from active support provided by Inria over a number of months. ” After winning the i-Lab competition in 2015, Mediego joined the West France incubator OFF7 and then the Rennes-based digital incubator, before successfully raising funds with IT-Translation, and their six-person team are currently continuing their trajectory with a real sense of dynamism. Since 2018, Mediego have focused on the personalisation of content within the context of online media (web, newsletters, applications), counting among their clients some of the major players on the media landscape in France, including Ouest-France , Le Monde , Euronews , La Dépêche interactive , Sud-Ouest , Le Figaro and Publi-hebdo .

Anne-Marie Kermarrec is the perfect illustration of Inria’s commitment to scientific excellence and transfer. She also sets a brilliant example to young women, encouraging them to study science and technology, some of whom might be tempted to try their hand at entrepreneurship

Anne-Marie Kermarrec has been awarded various prizes over the course of her career, whether for her research in the field of digital science, or for her entrepreneurial success: